Ahmadinejad is the Frontrunner in Iran’s 2021 Presidential Election 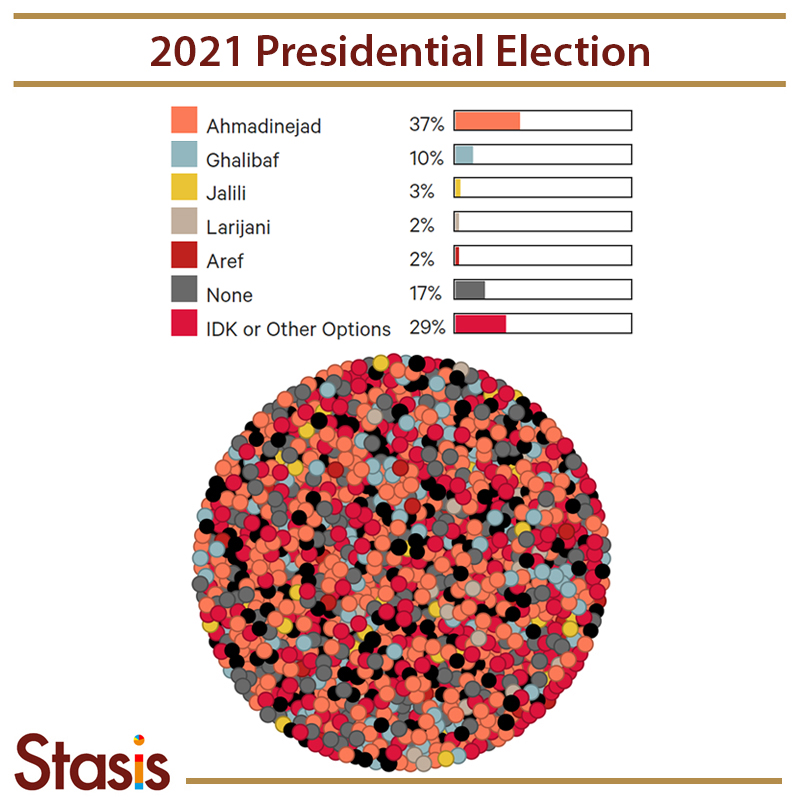 Mahmoud Ahmadinejad is a frontrunner in Iran’s next presidential election. Thirty-seven percent of the respondents in the latest Stasis poll say that they will vote for Ahmadinejad, followed by Ghalibaf (the current speaker of the Majlis, 10%), Jalili (the former national security adviser, 3%), Larijani (the former speaker of the Majlis, 2%), and Aref (the Majlis minority leader between 2016 and 2020, 2%).

The poll, conducted in October 2020 by Stasis, also found that Mahmoud Ahmadinejad is the most favorable political figure in Iran among a list of politicians including heads of three branches of the government, former presidents, potential candidates in the next presidential election, and the current foreign minister. Sixty-four percent of Iranians “very much” or “to an extent” like him.

The results of this poll indicate an overall disapproval of Rouhani’s presidency. Only 25% of respondents approve of his job, where 64% disapprove his job as a president.

To view the results of this poll in an interactive map, click the link.

This platform details the results of each question by gender, age group, location, and education in the bar chart.

Assessment of Iran’s Next Presidential Election

The next presidential election in Iran will not be held until June 2021 but some political figures have already signaled a potential run. The survey conducted by Stasis in October 2020 shows among some of the presumptive nominees, former president Mahmoud Ahmadinejad garners 37% support from Iranian adults, giving him a 27-point lead over his closest rival, Speaker Ghalibaf, who has 10% support. The other three potential candidates, including Saeed Jalili (former national security adviser), Ali Larijani (former speaker of the Majlis), and Mohamadreza Aref (former reformist Majlis minority leader) all trail behind with 3%, 2%, and 2% of support respectively.

Twenty-nine percent of respondents chose noncommittal options, such as “I don’t know” or “I have not made my decision.” Another 17% say they do not support any of these candidates. If these undecided respondents are removed and results are measured just among those respondents who affirmed their support of any of these candidates, then Ahmadinejad is leading his opponents in this part of the electorate by a wide margin. Sixty-nine percent of Iranians pick him as their first choice in the next presidential election in Iran.

According to this poll, former president Mahmoud Ahmadinejad is the most favorite domestic political figure among respondents given the choice of a group of politicians. Stasis asked about a number of politicians, including heads of three branches of the government, former presidents, the foreign minister, and potential candidates in the next presidential election in Iran. Sixty-four percent of respondents favor Ahmadinejad. Thirty-five percent of respondents reported liking him “very much” and twenty-nine percent like him “to an extent.”

Question: Let me name some political figures. Please express the level of your interest in each one. For each name I read, you can respond with: Very much like, like to an extent, dislike, or very much dislike. If there’s a name you don’t recognize, please say so.

After Mr. Ahmadinejad with a 64% favorability rate, the head of the judiciary branch, Mr. Raeisi, came in second with a 51% percent favorability rate. These are the only two politicians who were favored among more than 50% of respondents. Foreign Minster Zarif and former president Khatami tied in ranking at 45% each, followed by Speaker Ghalibaf (41%), former speaker Larijani and President Rouhani (each at 26%), former national security adviser Jalili (18%), and finally former Majlis minority leader Aref (14%).

On the other side of the spectrum, Sixty-five percent of Iranian mentions their dislike of President Rouhani, making him the most unfavorable political figure in Iran. Mr. Larijani and Mr. Ghalibaf ranked second and third in this ranking.

President Rouhani’s current approval is the worst approval rating we have ever analyzed. In the poll co-conducted by Arash Ghafouri—who led the Stasis team in this survey– in February 2016, around 67% of respondents approved of Rouhani’s presidency. His approval rating has decreased by 42% in the last four years and stands at just 25% in October 2020. Moreover, Mr. Rouhani’s disapproval shows a 46% increase in comparison with that February 2016 study (from 18% to 64%).

People who reside in urban areas or have a college degree are more likely to register their disapproval of Rouhani’s presidency.

According to this poll, a large number of Iranians (48%) did not identify with either of the two main domestic political parties. Reformists have the avowed support of 11%of the population, marking a decrease of at least 14% in comparison with 2016. In March 2016, we polled the same question (IPOS poll) and found 25% of Iranians were leaning toward Reformists and 5% were supporting the Moderates (Reformist adjacent).

Eleven percent of Iranians are leaning toward the Principlist party which is a more modest decrease (2%) from 2016.

Around 44% of respondents in the survey report that they will vote in the next presidential election in Iran. However, according to our previous analysis, the level of participation is likely to be approximately 10% below the survey’s findings. Moreover, given the more than eight months until the next election (which will take place in June 2021), identifying likely voters is beyond the scope of this survey. However, in the coming months, Statis will conduct further research to analyze more accurate levels of likely voters.

In this poll, respondents were also asked how confident they are that electoral participation can effectively resolve the issues the country is facing. Around 24% say it will be “very effective” and the same percentage believe it will be completely ineffective. In the middle of the spectrum, 31% report the belief that voting can be “somewhat effective” and 11% of respondents think it is not likely to be very effective.

The results of this poll have been interactively visualized in the link below:

This poll was carried out by Stasis for Iranwire. Arash Ghafouri, an Iranian pollster, has led the survey team.