Raeisi Continues to be ahead in Iran’s Presidential Election 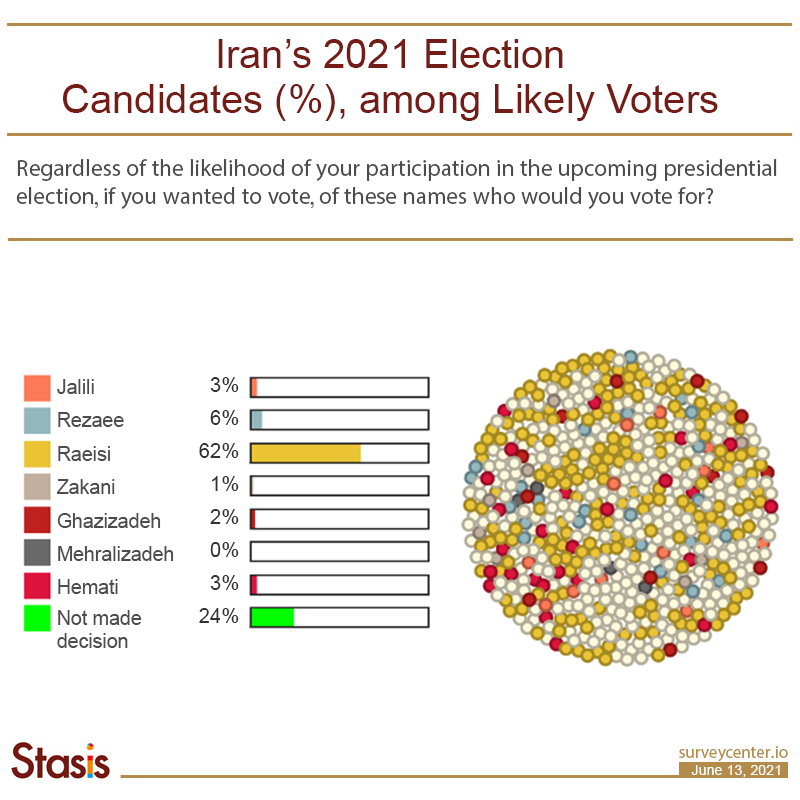 Ebrahim Raeisi keeps his lead as a frontrunner in the next Iranian presidential election. Sixty-two-four percent of the likely voters in the latest Stasis poll say that they will vote for Raeisi, followed by Mohsen Rezaee (the former head of the Revolutionary Guard, 5.5%), Naser Hemati (the former head of the Central Bank, under Rouhani’s administration, 3.1%), and Saeed Jalili (the former national security adviser, 2.9.4%)

Question: Regardless of the likelihood of your participation in the upcoming presidential election, if you wanted to vote, of these names who have been qualified by the Guardian Council, who would you choose? The candidates are listed here in alphabetical order. Jalili, Rezaee, Raeisi, Zakani, Ghazizadeh, Mehralizadeh or Hemati?

The poll, conducted by Stasis for IITV on June 13, 2021, for Iran International TV, also found that only approximately 32% of Iranian citizens will participate in the upcoming presidential election. Eleven percent of Iranians are undecided as to whether they will vote and another 58% prefer to not cast a ballot at all.