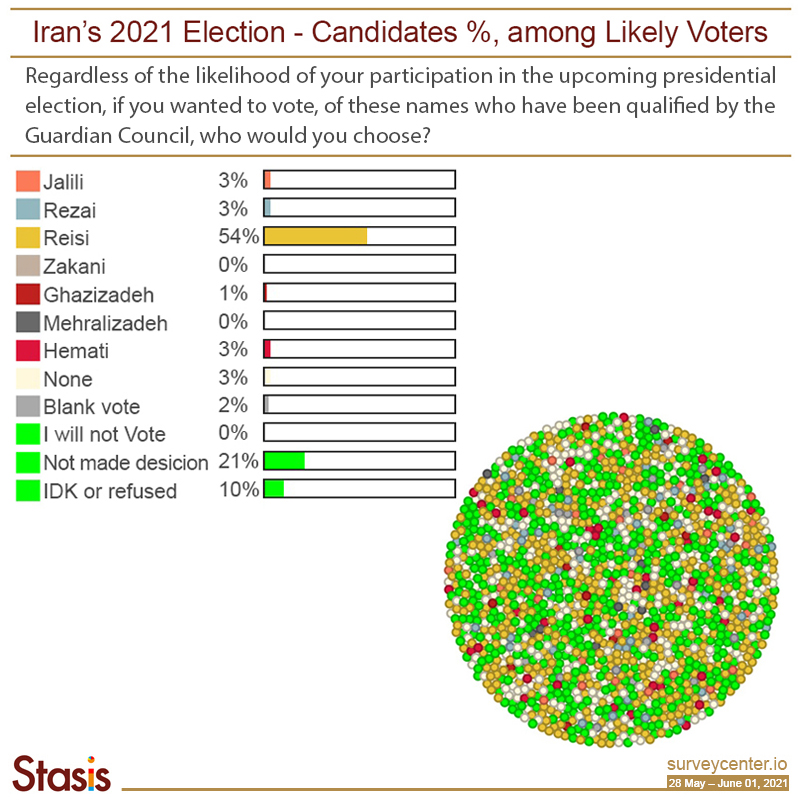 Ebrahim Raeisi is a frontrunner in the next Iranian presidential election. Fifty-four percent of the likely voters in the latest Stasis poll say that they will vote for Raeisi, followed by Saeed Jalili (the former national security adviser, 3.4%), Naser Hemati (the former head of the Central Bank, under Rouhani’s administration, 3.1%), and Mohsen Rezaee (the former head of the Revolutionary Guard, 2.5%).

Question: Regardless of the likelihood of your participation in the upcoming presidential election, if you wanted to vote, of these names who have been qualified by the Guardian Council, who would you choose? The candidates are listed here in alphabetical order. Jalili, Rezaee, Raeisi, Zakani, Ghazizadeh, Mehralizadeh or Hemati?

The poll, conducted by Stasis for IITV between May 28 and June 01, 2021, also found that only approximately 30% of Iranian citizens will participate in the upcoming presidential election. Twelve percent of Iranians are undecided as to whether they will vote and another 58% prefer to not cast a ballot at all.

The results of this poll show that 54% of Iranians disapprove of the way that the Guardian Council disqualifies candidates in the elections; 32 percent approves.

The respondents were also asked specifically about four of the potential candidates who were disqualified by the Guardian Council, including: former President Ahmadinejad, Vice-President Jahangiri, former Speaker Larijani and one of the pioneer figures among the Reformists, Tajzadeh. Based on this poll, just 25% of respondents said they agree with the Guardian Council’s disqualification of Mahmoud Ahmadinejad; 55% disagree. However, the numbers of those who agree with the Guardian Council’s decision to disqualify Vice-President Jahangiri (48%) and former Speaker Larijani (47%), far outpace the level of disagreement (16% and 21% respectively). As for Tajzadeh, 24% agree with his disqualification, 11% disagrees, and 45% said that they have no idea who he is.

Even though Ahmadinejad has been disqualified by the Guardian Council, this poll asked respondents hypothetically: if he were to have qualified for candidacy, and was able to compete with Mr. Raeisi, who would they choose? In this scenario, 46% would vote for Ahmadinejad, as opposed to 24% who would vote for Raeisi.

Question: Regardless of the likelihood of your participation in the upcoming presidential election, if Mr. Ahmadinejad were to have qualified to run as a candidate, and was able to compete with Mr. Raeisi, who would have been your choice? I mean who would you vote for? Mr. Ahmadinejad or Mr. Raeisi?

Question: In your opinion, to what extent is the president capable of solving the issues the country faces? Does he have a lot of power to solve these problems, some power, not much power, or no power at all?